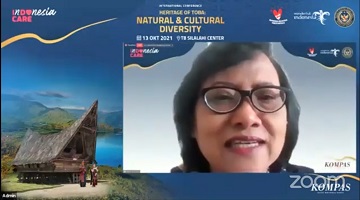 Prof. Harini Muntasib: Branding Lake Toba as Traces of the World’s Largest Volcanic Eruption Must Be a Pride

Prof. Harini Muntasib, an ecotourism expert from IPB University, spoke about optimizing the Lake Toba tourism sector through the development of environmentally friendly tourism. He explained, the branding of Lake Toba as a lake with the most active volcano in the world needs to be sharpened.

The IPB University lecturer said that in the interpretation of Toba’s nature through films to visitors, it is also necessary to add biological, geological, and socio-cultural objects. According to him, the traces of the Toba eruption as an extraordinary natural museum need to be highlighted. He gave examples, for example, traces of pyroclassical deposits and hot springs. On the other hand, there are lava deposits and lake-forming diatomaceous deposits which are often ignored as geological objects.

“There is an interaction between nature and society, thus forming a very distinctive culture, where the people around Toba form adaptations, myths, and history. These are all materials for themes in the context of actual interpretation. “Nature speaks to visitors, speaks to the community,” said Prof. Harini Muntasib at the International Conference on Heritage of Toba: Natural and Cultural Diversity organized by the Ministry of Tourism and Creative Economy together with Kompas, online, (13/10).

The IPB University lecturer from the Faculty of Forestry and Environment also said that tourist maps or interpretation plans can be prepared in the context of development. From this data, an information center can also be built for tourist visitors.

He also suggested that a film be made based on a scenario based on the interpretation of the occurrence of Lake Toba and Lake Samosir as tourist attractions. The film can show the conditions during the Toba volcanic eruption. Starting from before the eruption. According to him, this effort can attract the attention of many eyes from around the world.

“Lake Toba is a trace of the largest eruption in the world. This should be a great pride for us who need to be appointed for branding purposes” he added.

Not only that, Prof. Harini also suggested that people build a sense of pride in Lake Toba. The reason is that, from 10 regencies around Lake Toba and Samosir Island, it is hoped that they will have the same perception of Toba.

Prof. Harini also suggested that the collaborative management mechanism for Toba tourism could involve the government and non-government. But still in the same perception, especially in resource conservation. Not only that, in this collaboration, the rights of indigenous peoples from the social and cultural aspects are also prioritized so that they become one of Toba’s tourist attractions. (MW) (IAAS/FJN)